The middle school boys "B" team concluded their season with an extremely close game vs. Berks Christian on Monday, February 6.  Showing improvements from game to game, the Cougars finished with a season high of 31 points in the game.

On Friday, February 10, CCS held the 4th annual Conestoga Hoops Shootout.  The event included the boys and girls teams from Dayspring, Linville Hill, and Lancaster Mennonite Hershey.  The action began at 3:30 with the CCS girls losing to Linville Hill.  Their last game of the season came in the consolation game vs. Lancaster Mennonite Hershey; the girls played well but lost a close one.  The boys handily won their opening game vs. Linville Hill and then played in the championship game vs. Dayspring, concluding at 9:45 with a win for the Cougar boys.  All-Tournament Team honors were given to Alexis Kohler, Collin Weaver, and Spencer Colón. 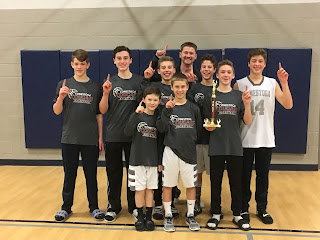 On Saturday, February 11, the middle school boys "A" team concluded their season at the Lititz Christian Tournament.  This tournament was round-robin format, allowing the boys to play three games.  The Cougars fought back from an early 8 - 0 deficit in their opening game vs. Lancaster Mennonite Kraybill to win 24 - 21.  While playing their fourth game in less than 20 hours, fatigue set in, and the boys dropped a 22-26 heart breaker to Lititz Christian.  The boys regrouped and played their last game of the season vs. Manheim Christian just 30 minutes later.  After a shaky start, the Cougars found themselves down 0 - 6; gritty play put CCS up by three at the half.  The Cougars came out firing on all cylinders the second half, extending their lead to as much as 15 and won 33-20.  Congratulations to the boys as they finished 2 and 1 making them the Tournament Champions.  Conrad Yoder was named to the All-Tournament Team.  The boys capped off this memorable season with a record of 18-3.
Posted by Phil Yoder at 6:59 PM